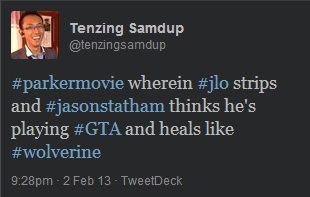 PARKERRRRRR!!
Y-y-yes Mr. Jameson!
Whoops! Wrong Parker (unfortunately).
When I first saw that a movie named Parker was going to be showing, I couldn’t help think of the most popular Parker, Mr. Peter Parker AKA Spider-Man.
I read the synopsis and even then I couldn’t help think of Spidey. Parker tells the story of a criminal who gets even on some guys. Now can you imagine, it’s the future and Aunt May is long dead and so is Mary-Jane (she died in an accident or something). Peter has become disillusioned with crime-fighting and has turned to crime (with his wall-climbing abilities, super agility/reflexes/strength and organic/artificial webs, he’s the perfect burglar).
After a routine job, the other villains (let’s say, Sandman, Rhino and Vulture) double-cross him and leave him for dead. Peter with his accelerated healing survives and starts on the journey to get revenge, while hooking up with Black Cat on the way. Throw in an arms dealer played by Deadpool, Venom in some BnW flashbacks, cameos by various Avengers (possibly on TV or background posters) and you would have a hit movie on your hands!!
Sigh…
Anyway, geek fantasies aside, Parker is the story of how Parker (Jason Statham) is a scrupulous criminal/thief who frowns on hurting innocent people. He joins a new crew (Michael Chiklis and 3 other guys) for a job but when they’re driving off, they end up shooting him and leaving him for dead; and thus begins Parker’s revenge story!
On the way he meets JLo who is a divorced and HOT real estate agent, fed up with her life and wants to get away from it all even if it means doing illegal stuff and stripping to her bra and panties (as mentioned before). Funny thing, someone in the theater actually clapped when JLo stripped!! Havn’t laughed so hard in a while, haha.
Overall, the movie is pretty forgettable and is your basic action/revenge/Jason Statham movie. As always, fight scenes are decent with  Jason Statham getting beaten up really badly. Fortunately he heals like Wolverine, well not that fast, and comes back from half-dead to take on 3 hardened criminals, one of them Michael Chiklis, who is a BIG guy.
Watch this if you have nothing else to do and want to see a JLo stripping; otherwise go watch Transporter (the first one) again.